The Phillip Goetkin award was created by Friends of Wolf Trap to honor individuals that have provided exemplary service to Wolf Trap National Park for the Performing Arts and to Friends of Wolf Trap. Phil initiated the emphasis on the natural environment of Wolf Trap including the gardens and wood lands. He approached the Potomac Appalachian Trail Club to request that it construct a hiking trail around the Wolf Trap perimeter. This trail has transformed the Park from a seasonal park to a year-round park.  Phil was the first recipient of the award. 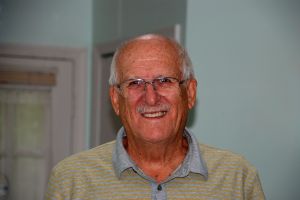 Michael Moran (FOWT Board Member, Emeritus) — the third recipient (August 2018) — played an important role in establishing the trail, served as the first trail overseer, and was a founding director of Friends of Wolf Trap. He established excellent rapport with Wolf Trap staff & liaison with organizations that share the Friends and Park goals for the natural environment.

He provided leadership for Boy Scout Eagle projects that have improved the hiking experience. This includes the connector trail between Wolf Trap and Cinnamon Creek Homeowners Association that permits safe foot traffic to Meadowlark and the Fairfax County Gerry Connolly trail.